We talk about using different lenses in social work to be able to see the same issue from different theoretical view points. I think it would be really powerful if we can learn to use a lens that has a less anthropocentric view of the world. Nature has value outside of what use it has to humans and many indigenous cultures give us a better perspective on that than the dominant colonialist culture that has led to the development of neo-liberalism & its associated problems.

Yet when I was taught about social work theory this type of world view was missing. I was lucky to read the work of Val Plumwood who pointed out that when the white people invaded Australia they treated the perspective of the Aboriginal people as being child like and illogical. Yet I think it is now accepted that human life needs all those other entities to live so we are connected.

However in practice it is still common for system/society to act as if we humans are separate. Our connection to non-human entities is rarely treated with the seriousness of human to human connection. Many services do not have space for the non-human family members and many times a worker may not even ask about the non-human entities that are important to people – this includes place as well as other non-human animals. In the dominant culture today it would be unusual that a person would not want to move if moving meant they could get a job. A child’s love for an animal that happens to be a rooster or sheep is not enough to stop that animal ending up on the family dinner table and people who sit in trees or chain themselves to bulldozers to stop a forest being destroyed are not usually portrayed as heroic. The stereotype is that they are weird probably with lower hygiene standards and they just need to grow up, get a haircut and a real job and start contributing to society in a useful way. Too often part of being an adult in many societies is learning how view the connection to our ecokin as second class. 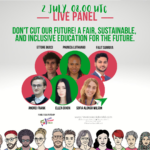